I’ve wanted to be a playwright since around the age of eight although, in reality, I didn’t have a clue as to what this meant. I’m still not sure I do. Goodness knows where the desire came from. I grew up in a working class family in Gateshead during the 1960s/70s where anything to do with the ‘arts’ in the most widest possible sense – music, theatre, opera, literature, ballet etc – was considered only something for posh people.

When I was a teenager I regularly posted hand-written dramas to the BBC in London. Bless them, I would always receive a really helpful reply from someone who really had read the script, probably with some difficulty, and had subsequently spent some time producing a detailed critique. Those were the days. Then a busy career came along in journalism and later media relations. Writing took a backseat until I had a complete life change in my mid forties when, in 2005, I moved from Kent to the Highlands of Scotland.

Although still working full time, I gained almost three hours a day because of no longer having to commute, and was determined to use that time to start writing some of my many ideas for plays. My plans didn’t get far. Catherine and I went to Orkney on honeymoon that year and visited the famous chapel, built by Italian POWs during the Second World War. I was hooked on the story before we had even left the building and soon began working on the script for a feature length film about the chapel’s creation.

Not surprisingly, I couldn’t get anyone in the film industry interested, but one of the agents I contacted suggested that the idea might make a good novel. In 2009 my debut novel, The Italian Chapel, was published by Black & White Publishing. I had finally set off on the writing road instead of looking at it longingly through the window, and although this was perhaps not the route I had originally intended I was at least now using a keyboard. 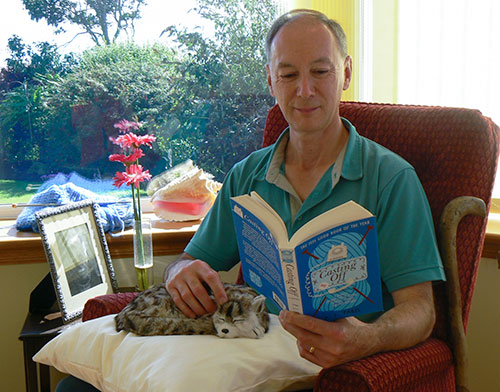 Reading a copy of Casting Off while surrounded by some of the props from the stage play upon which the novel was based. Tiddles the cat had a leading role in both!